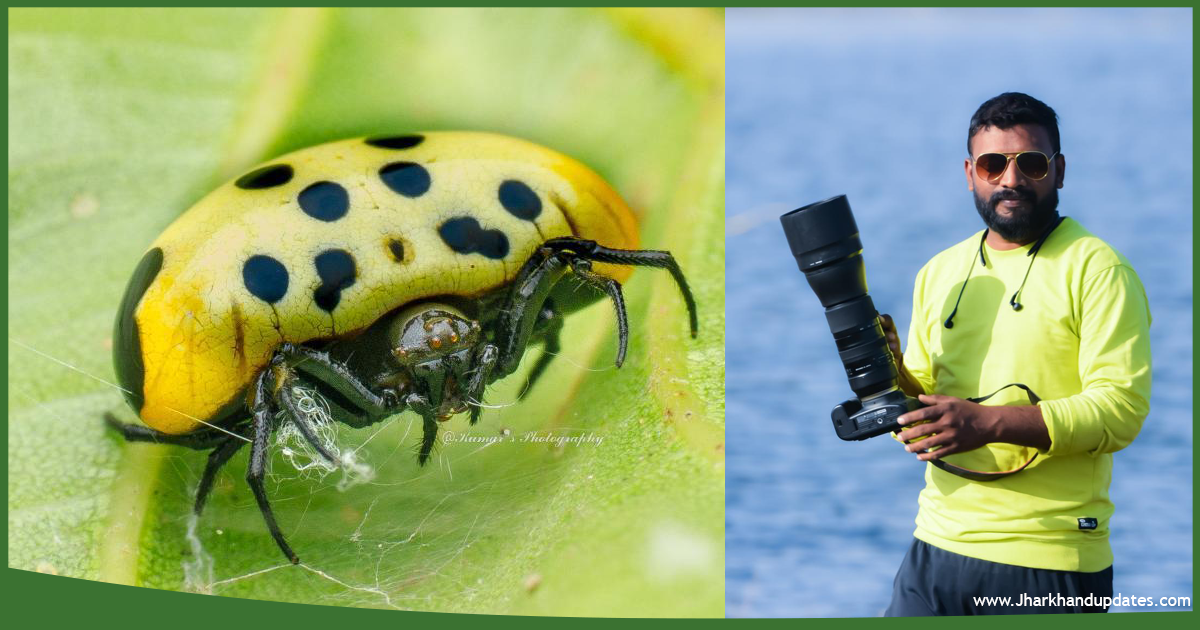 Ranchi: In the forest of Namkum, near Ranchi, Jharkhand a species of spider called ‘Ladybird Mimic Spider’ has been found. After China, Japan and Taiwan this spider species has been found for the first time in India, a remarkable news for India as well as Jharkhand. Sunil Kumar, a wildlife expert captured the pictures of this spider recently in Horab Jungle of Namkum.

Meanwhile, biologists have also started research on this spider species. During their recent study, they came to know about the unique characteristics of this species. After a while, Dr. Mithilesh Dutt Dwivedi confirmed the pictures of ‘Ladybird Mimic Spider’ as a rare species found in India. Furthermore, Dr. Bokde (Prof. JDPS College Dariyapur, Amravati) of Maharashtra approved the spider as a rare species and said, “This spider has been found for the first time in India. Earlier this spider was only found in China, Japan, and Taiwan. It is a proud feeling to have this spider for biological research studies in India.”

Since last three years, Ranchi’s photographer, Sunil Kumar, has been involved in microphotography and research of birds and animals. So far, he has taken photographs of more than 1000 birds and animals. Earlier, he took photographs of an extinct species of ‘White Rumped Vulture’ in Namkum Jungle. It is interesting to know that while Sunil clicked the pictures of Ladybird Mimic Spider in Horab Jungle, he did not even know that it is a rare species of spider found in the country. After sending the picture to Biologist, Dr. Mithilesh Dutt, he came to know about the great success he had achieved.

About this spider found in the forest, Dr. Mithilesh further added that, “this spider was named by Japan in 1960. As this species is seen here, this is good news for Jharkhand along with the whole country. It is also a good sign for the environment. This spider also plays an important role in keeping the forest safe by eating insects in the wild areas and helps in biodiversity too. Now that it is found, more needs to be known about this species.”